PMT Makes a $25,000 Contribution to the Rupert Square Renovations 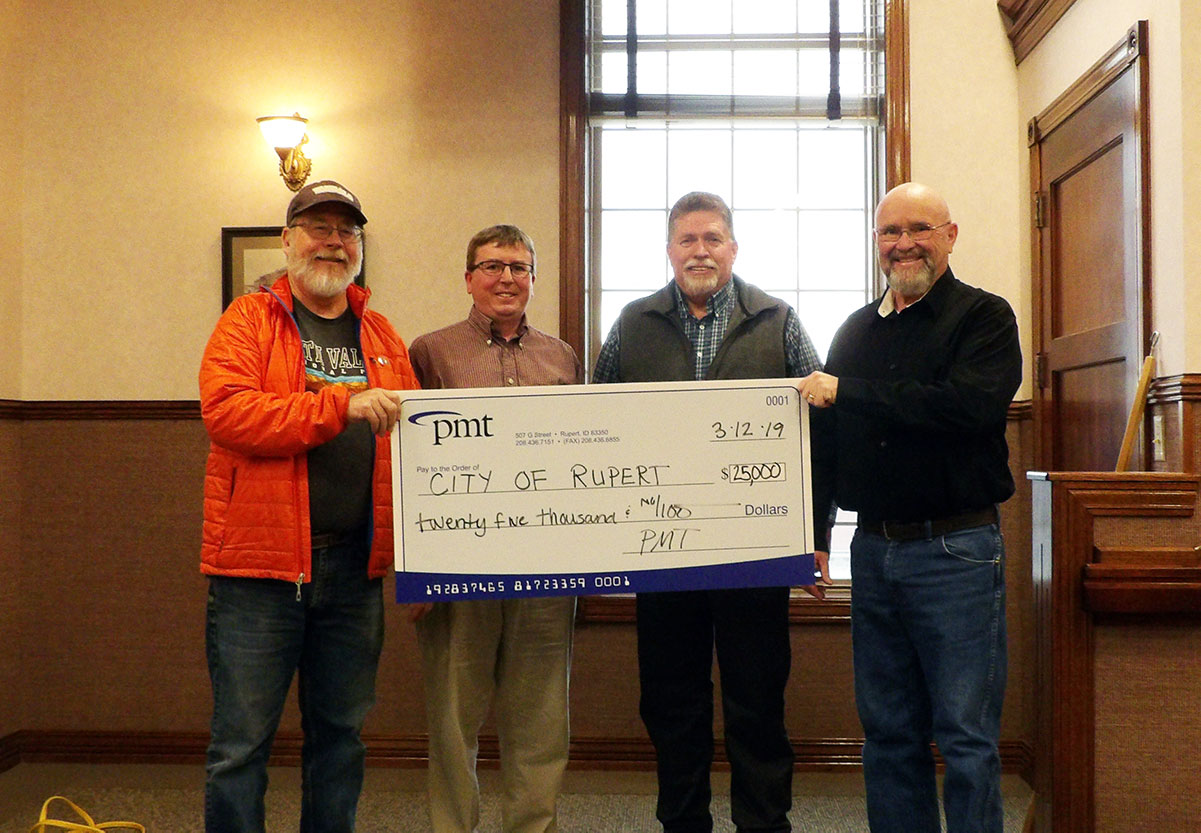 PMT recently made a $15,000 donation to the City of Rupert to help with the Rupert Square renovations.  PMT also made another $10,000 contribution to the Square project in Charlie Creason’s name in honor of his retirement from PMT.  Creason was the President and CEO of PMT for over 22 years from 1992-2015.  Creason has been a long-time supporter of economic development and Rupert’s revitalization, spearheading projects such as the Wilson Theatre renovation and developing Wee Links, a 6-hole youth golf course.  Creason also owns E-Street Deli and the Drift Inn, both on the Rupert Square.

“It was an honor for the PMT Board of Directors to recognize Charlie Creason for his outstanding leadership as he retired as General Manager at PMT! In recognition of his years of civic involvement in helping to renovate downtown Rupert, the Board chose to donate in Charlie’s name to help in the remodel of the Rupert Square and park,” states Alan Johnson, PMT Board Member.

“Charlie believes in the power of community and set the precedent of giving back to our community that PMT is known for.   PMT is glad to continue the tradition he set and be highly involved in the communities we serve.  When Charlie retired, the Square project was just getting off the ground.  Now, four years later, we’re happy to make this donation, part in his name, to leave a lasting legacy on Rupert and those that live, work, and visit here.”

About the Rupert Square Project

Phase 2 of the Rupert Square renovations started the beginning of March and is scheduled to for a June completion, in time for the Rupert 4th of July Celebration.  Rupert Square Phase II project will update the existing streetscape to include new concrete curb and gutter, sidewalks, and landscape. New curb and gutter will be placed on the corners and adjacent intersections of the Square. New sidewalks will contain a mix of fresh concrete and pavers that aim to update the surrounding aesthetics of the recently renovated park. New landscaping on the streetscape will include new trees in concrete planter boxes with decorative fencing, new concrete planter pots, and hanging baskets that will be installed on light poles. The project will also install two new customized items, one of which will be a 3’ x 5’ City of Rupert medallion that will be inset into the new concrete approach on the Southeast corner of the Square. The second customized item is a post clock that has been donated and will help to add to the updated aesthetics.